Two Christmases ago I decided Nick and I needed some stockings. It was our first year in this house and I was really feeling totally tacky, gaudy, super fun Christmas decor. So I DIY’d some colorful and a little bit silly stockings.

Would you believe me if I told you that Nick loved his? In fact, when he saw that I was whipping up some new ones for this year he commented several times that he liked the penguin stocking. But since there are three of us now I’d be making a new stocking for Jack anyway, and I figured I might as well make us some more sophisticated stockings while I was at it. I promised him I’d try to find a way to repurpose the penguin. (Update: when he saw me taking pictures of them this morning he called me a horrible person for forsaking our old stockings. I think he was only half joking. I’m really surprised at the depth of his passion for the penguin stocking).

So anyway, here’s what I turned out using stuff I already had on hand: canvas painter’s dropcloth, black felt, and fusible web sheets.

I started by drawing a stocking shape onto my dropcloth with pencil and cutting it out.

Then, I used that stocking-shaped piece of fabric as a template to trace five more stockings onto my dropcloth, then cut them all out. You may have to squint a bit to see the pencil lines, but they’re there.

With all six pieces cut, I gave them a good steamy iron to get the creases out and then paired ‘em up. 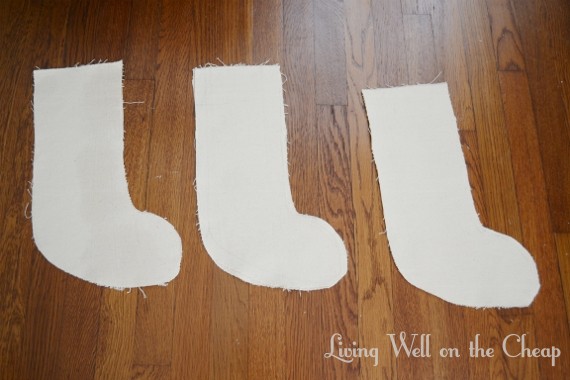 I made a quick hem at the top of each piece. If I were feeling ambitious I would have folded the fabric over twice and pressed it before sewing, but since these will only come out for a few weeks a year and probably never hold any actual stocking stuffers (we spend Christmas out of town), I figured no one would ever know my dirty little secret that there are raw edges inside the top of my stockings. 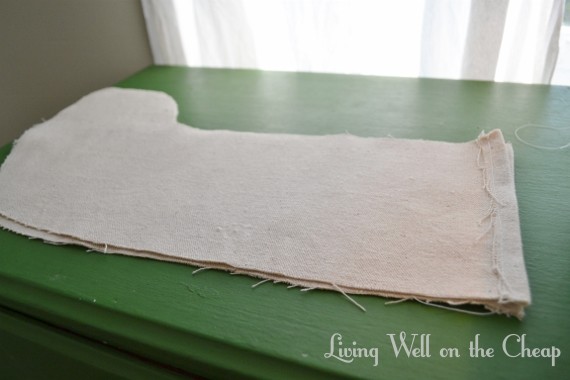 Next, I made sure my two pieces were lined up nicely and then carefully sewed all around the perimeter (leaving the top open, of course). On my first one I went a little fast around the toe and had to rip out my stitches for a do-over, but I figured out how to take the curve pretty smoothly after that.

Then I trimmed the excess fabric from around the curvy areas and turned the whole operation inside out. Bam. Stocking.

Now, for the part where I add our initials. I dug through my stash of scrap felt. It’s times like this that I forgive myself for hoarding so many craft supplies. I had these little 4×4 squares left over from this project a long time ago.

I printed each of our initials in a pretty font (Fontleroy Brown, to be exact, which is also the font used in a lot of my blog graphics), then traced them onto a sheet of fusible web. It’s like iron-on hem tape except a whole sheet of it.

I cut my letters out using the crappiest pair of scissors I own because I have learned the hard way that this stuff will gunk up your shears then peeled off one side of the backing, sticking the letters backwards onto the felt.

Then I used my good scissors to carefully cut out around the paper, giving me my pretty black felt letters.

A steam and a press later, booyah, letters affixed to stockings for all to enjoy.

I hung them each with a little loop of cotton cord sewn into the hem and a white thumbtack.

If you didn’t have fusible web around you could just use paper as a stencil and fabric glue or hot glue to affix the letters, and if you didn’t have any black fabric or felt you could even make a freezer paper stencil and fill the letters in with paint. So many options! The best part about stuff like this is just getting creative and using what you have. If you spend as much money buying supplies for a project as you would to just buy it already made then it kind of defeats the purpose (except for the JOY OF CREATING, but whatevs).

I still haven’t Christmas-ified the mantle. That’s on my to-do list for today so that we can snap a family Christmas photo in front of it in time to actually get a few cards in the mail.

PS I am sharing this post over at my friend Brandi’s blog a A Brandi Sized Blog today. She is doing a holiday post series with lots of cool projects and she is also hilarious, so give it a look-see. She has a super cute little etsy shop, too, and just happens to be my first ever sponsor! See that little ad in the top right for ABS Shop? Yup, that’s her. She’s got some vintage and handmade wares that are a little different from mine because variety is the spice of life. I would love it if you went and checked it out!