If you ever hear me talk about painting a room a bright or bold color again, please stop me. I began to hate the blue in my laundry room almost immediately after painting it over a year ago. And because I didn’t like it, I let the room fall to shambles. See below.

I bought a can of Olympic no-VOC paint in off-the-shelf white last summer and started cutting in, but that’s about as far as I got. 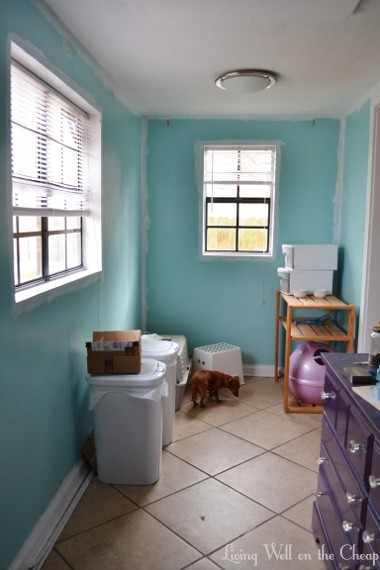 I’m hosting a bridal shower for my sister this weekend and the prospect of all those ladies in my house got me motivated to finally finish what I’d started in here. So on Saturday morning I handed the baby over to Nick and moved everything to the middle of the room.

I knew from my previous cutting-in experience that the white paint was not going to provide great coverage over the blue enamel. It just slid all over and dried all streaky looking. So I did something I rarely do–used primer!

I used this nifty tool to cut in. I wouldn’t recommend it if you’re a detail-oriented person because it’s not perfect, but I’d rather pry my own fingernails off one by one than to painstakingly cut in every. single. edge. with a brush, so this thing was a lifesaver.

It seriously made cutting in so fast. I had primer on all the edges in no time.

And since I was rockin and rollin the rest of the room was primed in a jiffy as well. Imagine me feeling optimistic about being done by lunch.

But lunchtime came and went and after two coats it was clear I needed yet another. By late afternoon I was tired, so I decided to call it a day.

Bright and early Sunday I rolled on a third coat of white paint, let it dry, and voila! A freshly painted laundry room!

I poured the laundry detergent into a glass canister and recruited an unused basket to corral clean washcloths. The canister used to hold dog treats so poor Juliet comes running every time she hears it open, haha. There were originally cabinets on that wall when we moved in but we ripped them out and replaced them with those simple shelves. I cleared out so much stuff we weren’t using that there’s quite a bit of empty space on them now. The washer and dryer came with the house and have certainly seen better days. The washer’s transmission is on its deathbed according to my sister’s fiance, who seems to know about this sort of thing, and the dryer sometimes emits a burning smell so I’m too scared to run it when we’re not home or after we go to bed. I cleaned out the vent really well while I had it moved for painting so maybe that will help. Nick and I are hoping to replace them sometime in the next few months. 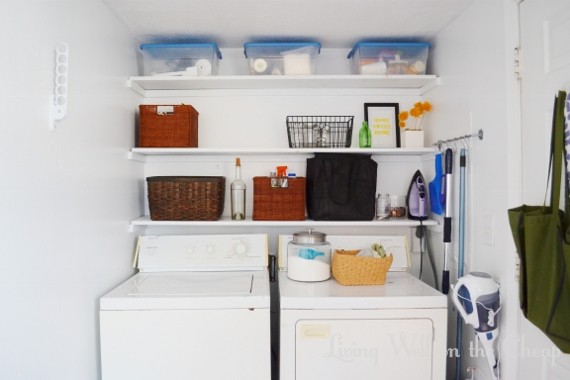 Welcome to the ugliest spot in my entire house. This is the downside of having cats–the litter box! Ugh I hate it. Those two plastic drawers hold dog and cat food and the crate is just a glorified place for the cats to sit while they drink their water. We originally thought we would crate Juliet when we weren’t home but she was so pitiful about it that we gave up. I have an idea to create a little storage area over here that also hides the cat litter, but that’ll have to be tackled in a few weeks probably. 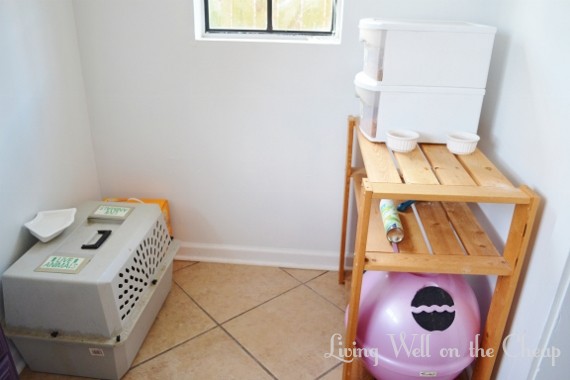 We changed up the layout a little bit as well, moving the purple dresser to be under the window and the trashcans to be next to the doorway to the kitchen. Two trashcans = one for recycling, one for trash.

I was totally thinking I would try to clear out and get rid of that purple dresser, but I kind of like it in its new spot. I bought it secondhand for my first apartment, and it was my very first spray paint project a few years ago. It was on this piece that I learned the hard way that spray paint does not work that well on flat surfaces–it’s best left for small or oddly shaped/textured objects. I’m thinking of keeping it and repainting it and possible changing out the knobs.

Also on the agenda for this room is some new window treatments. I’d love to get a woven shade for that back window and maybe apply some some frosting film to the small window in the far end of the room. I actually have a dream to someday put a tiny half bath in that little nook where all the pet stuff is, but that’s waaaaay down the line and might not ever even happen. In the meantime, I am absolutely amazed at what a difference the white paint makes. I’ve done a couple loads of laundry in the last few days and am amazed at how much bigger and brighter the room feels. I’m learning as I go with this whole home decor thing and I’ve decided I really prefer light, neutral colors on walls and large furniture. Tables and dressers are easy for me to change up with paint so I don’t mind going a little more bold on those pieces, and it’s fun to bring in color with textiles and accessories, but anything expensive or tedious to change should be pretty dang neutral in my book. Now if only I could motivate myself to paint over all that red in the upstairs bath…