A few weeks ago I rearranged some of the furniture in my office. moving this small end table to in front of the window. I got it on craigslist in 2011 for $35 and used it as a nightstand for a long time, but when I switched things around upstairs I moved it down here to go with the two small chairs as a play table for Jack (check out that link to see how far this room has come since last summer!). I actually really liked the wood tone of the table when it was upstairs, but the floors on this level are a slightly different shade and I felt like the floors + table clashed. 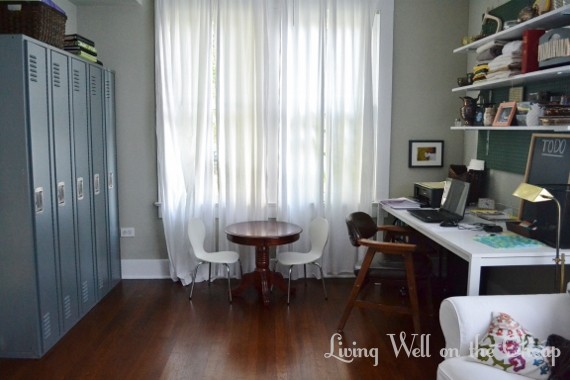 I usually like to bring swatches home before deciding on a color, but I was feeling brazen so I picked a shade I plucked right from the display. I think motherhood has made me more decisive. The color I originally picked was Valspar’s Gala Gold, but the lady working the paint counter gave me a hard time about mixing a Valspar color with Olympic paint, so she helped me find a matching shade in the Olympic display and we were both happy. The color I went home with is Olympic Golden Glow (mixed with their premium/no-VOC paint in an eggshell finish). I painted most of it in the living room while watching TV with Nick after Jack was in bed. It took so many coats that I lost count but I spread the work out over a couple of nights so that I wouldn’t get annoyed (yeah, yeah, shoulda used primer, I know).

At first I thought I might leave the top unfinished, but after a few coats I brought it into the office to see what I thought and the two-tone look was just not working for me.

I used a brush on the base and sides and a small foam roller on the top, and despite having to apply eight thousand coats I still have at least half a quart of paint left. Sometime this week when I get a chance I’ll bring it outside and spray on a few coats of some protective enamel that I’ve used in the past.

Here it is in its natural habitat: 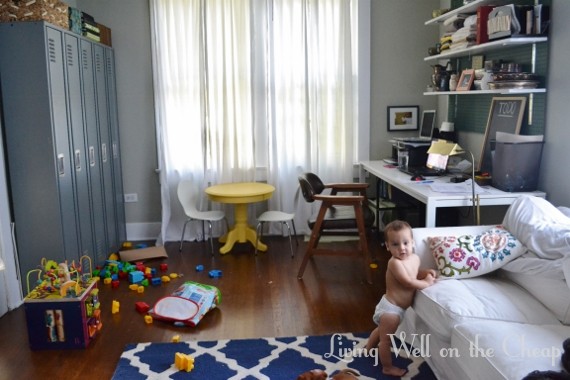 After Jack went down for his nap I cleaned up the room for some prettier shots that I can use to update my house tour page. 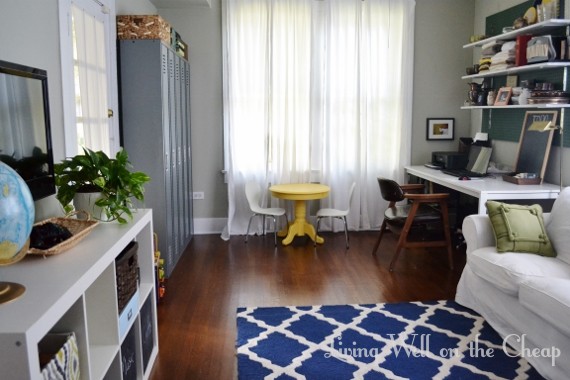 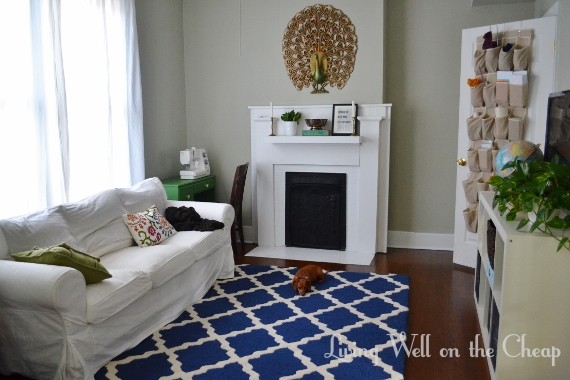 I really have to thank the person who pointed out to me that the prior arrangement was not working as well as it could. Sometimes it’s hard to hear negative feedback and my first couple years in the trenches as a social worker were really difficult for me because I couldn’t handle all the criticism being slung my way by resistant and defensive clients. I didn’t realize at the time just how challenging my client population was–I thought it was just me. Those were some of the most difficult years of my life and they’re what inspired me to start this blog. I needed a creative outlet free from all the pressure and emotion that I felt at work. As hard as those years were, they helped me develop the valuable skill of being able to process criticism effectively. Whenever someone says something unpleasant to or about me I stop and evaluate whether I objectively think that it’s true (example: client yells at me for being so nosy when I ask her how her day was. This is hard for me to hear because I am, in fact, pretty nosy, but I was not being nosy in this instance so I chalk it up to her being defensive for some reason that it’s apparently my job to find out. Thank God I’m not working with teenagers anymore.). In this case, I stumbled across some folks discussing my blog on an internet message board. Some posters who seem to be frequent readers of this blog were saying some super sweet things about me (thanks y’all!) and others were saying that it’s just not their style (totally fair) or that certain things in my house looked a little “off” to them. This was valuable feedback for me, because it inspired me to look around a little more objectively to see whether I agreed. My home is a work in progress and there’s always room for improvement. I decided that, in fact, my little sewing desk would fit better at the end of the sofa and Jack would have more room to actually use his play table if it were in front of the window. This is so much better! So the moral of the story is twofold: 1) just because somebody says something about you doesn’t mean it’s true, so don’t take everything so personally, and 2) sometimes criticism can inspire you to change for the better, so don’t write it off right away.

Whew, I didn’t expect to get all Dr. Phil on y’all this Friday morning! Actually, in my professional opinion I think Dr. Phil’s a quack, but that’s just me. I hope y’all have a wonderful weekend and thanks as always for reading. You truly light up my life.