Check out this handsome little number I picked up from craigslist on Friday. It was only $40. A label on the underside indicates that it was made by the Alma Desk Company in North Carolina, I’m guessing in the late 60′s.

When I first got it home I was disappointed because it’s a little bit taller than the other chair, even in the seat. I’d been hoping for a pair that was mismatched but of similar proportions and the slight size discrepancy was bugging me. 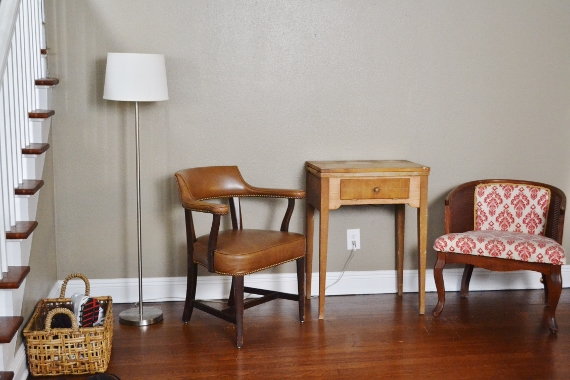 But the longer I look at it I feel like they’re the perfect couple–one is tall, dark, and handsome and the other is short and curvy (sort of reminds me of another couple I know. If only the tall one was talking incessantly about sports it’d be uncanny.).

Our DVR has been pretty boring lately so Nick and I have been playing card games a lot in the evenings. The little tilt-out drawer in the sewing table holds a couple of decks of cards and a small notebook and pen for keeping score. When I eventually find a lidded basket or storage ottoman to slide underneath I figure I can use it to store board games and the like. We usually sit at the dining table for that sort of thing so it’s really convenient. We even tried sitting over here to play rummy one night but it was awkward. I do sit here to watch Jack play though. It’s way more comfy than the dining chairs. 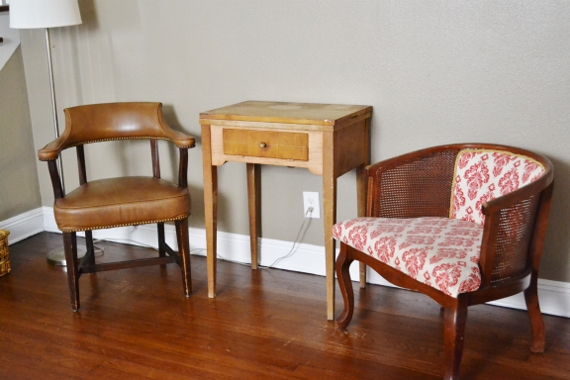 Our dining room is a little oversized and oddly shaped and also serves as a hallway of sorts so it’s nice to finally figure out some sort of identity for this spot that doesn’t take up as much room as the old couch-and-coffee-table setup did. I think this spot will be great for entertaining–we don’t host parties very often but I do prefer to have plenty of seating available when we do, and since our kitchen is not really big enough for a crowd it’s nice to have extra surfaces available in the dining room. This little sewing table would be just perfect for serving up drinks.

I hung a big mirror on the wall yesterday and it looks so great–more on that tomorrow–and when I get around to it I may put up some old family photos that I’ve been collecting for months. I’m eyeing this ottoman from Target to slip under the table. I am so excited for how it’s going to look all put together–I wish I had a wide angle lens so you could get a feel for the whole room.

I hope you each had a wonderful weekend. Ours was pretty great and the icing on the cake is that Nick has this whole week off from work! I spy lots of family time in our future.