I’ve been working on this table on and off for nearly two months and am proud to say that with some help from a professional metalsmith I can finally call it done. It counts as DIY if someone I know did it, right? I considered sparing you the details of all my failed attempts to do it myself, but decided there was no sense in sugarcoating it. Let’s start with the two steps I actually got right. First, I bought an 18″ wood round at Lowe’s for under $10. I sanded it down a bit and then gave it one thin coat of white paint. I wanted the grain to show through for a whitewashed effect.

I also picked up a 10 foot copper pipe, eight endcaps, and a pipe cutter. I cut the pipe into four 28″ lengths. It was my first time using a pipe cutter but it was super easy. It didn’t come with any instructions so I YouTube’d it. You just mark where you want to cut, tighten the rotary blade against the pipe, and twist, tightening periodically as you go. I honestly don’t remember how much I spent on these supplies but I feel like it was under $30.

I made a series of complicated marks that I didn’t really understand to try to figure out where to attach my four legs. My dream was to have a tripod table, but I couldn’t figure out how to cut and attach the pipes at an angle so my plan was to go four-legged.

But it didn’t matter because my plan to attach the pipe caps with screws and then slip the legs into them didn’t work anyway. I couldn’t get the caps to attach securely. So then I used a template (found here) to drill angled holes for my pipes using a spade bit. I couldn’t find a bit that was the exact outside diameter of the 3/4″ pipe and my table wasn’t thick enough to drill deep holes anyway, so my plan was to just create the angle with the drill bit and then attach the caps with epoxy, slipping the pipes into them after the epoxy had cured. 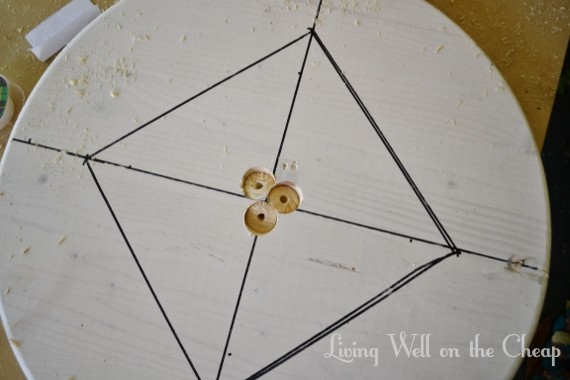 It didn’t work. My table was crooked.

So then I went back to the four-leg approach, trying this time to attach the caps with epoxy instead of screws.

I didn’t even snap a photo of the outcome. It was that bad. At this point I finally took my friend Cassie’s husband Nic up on the offer he’d made weeks ago to help. He’s a professional metalsmith who actually enjoys this kind of thing. On Saturday we went to the shop that he shares with a couple of friends (also professionals). It was like a giant, metal-filled man cave. This was baby Olive’s first trip to the shop! She seemed to like it. 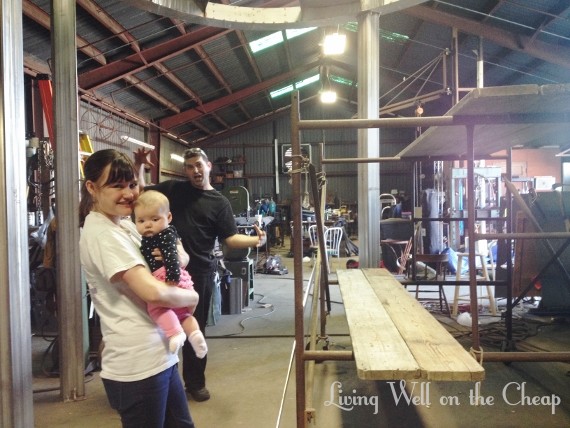 Check out this welding cart. The other two guys at the shop do a lot of artsy stuff, while Nic is more into functional pieces.

This is Nic’s corner of the whole place. He maintains that he does not have a hoarding problem.

He said he could make the tripod idea work and I was thrilled. He inserted a metal rod into each of the three pipes and screwed it into place.

Then he used a compass to mark the diameter of the tabletop and used some kind of math to figure out how to space the legs equally around the perimeter. He leaned the legs together into a tripod shape, placed a square metal plate on top, checked that it was level, and then broke out the torch to weld it all together. He made me put on a mask just to take this photo.

He attached the metal plate to the underside of the table, popped a copper cap onto the bottom of each leg and bam, he was done! It actually took a couple of hours but I got to hang out with Cassie and Olive the whole time so it was fun. Back home, I gently sanded the printed letters and numbers from the pipes and gave them a light polish with some ketchup (a trick I gleaned from that post linked above with the drilling template). I wanted to keep some of the patina the metal had gotten from sitting on my porch for two months. 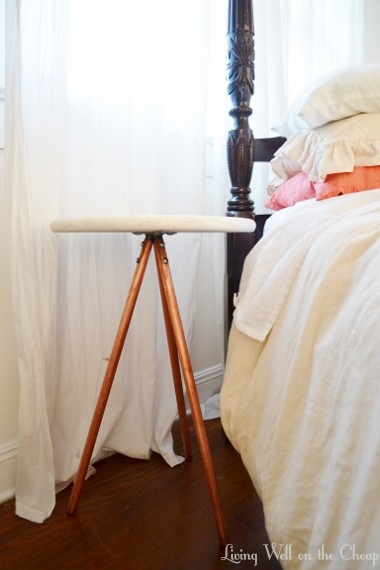 It’s a happy accident that it ended up almost the exact same height as the other nightstand. I don’t feel like my bed is that tall but it’s nearly impossible to find nightstands that aren’t super short. 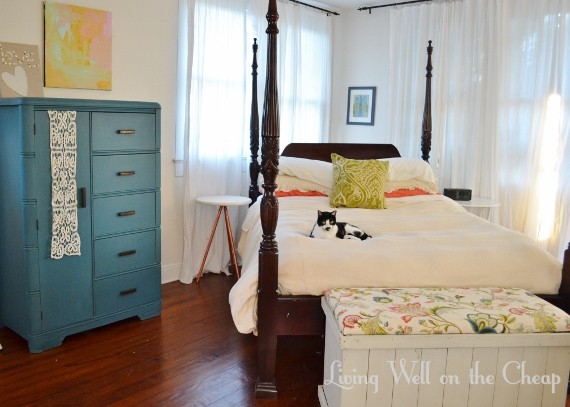 It’s really hard to get a good photograph of our room, so I took this panoramic shot with my iPhone to give you an idea of the layout. I didn’t think I would like having the bed at an angle like this but it’s actually working out really well.

I can’t get over what a great job Nic did on the table. It’s super sturdy and exactly what I’d imagined. If you’re local and need some metal work done let me know and I can put you in touch with him. He’s always taking on side jobs for fun. His specialty is these awesome firepits with fleur-de-lis cutouts that he makes around the holidays for $400 each. I can’t wait to break out the s’mores in their backyard as soon as it gets a little colder!

Update: here’s a picture of one of Nic’s firepits. He says: “The bottom has a trap door, for easy clean out, and I make the legs differently now. It comes with a fire poker, clean out tool, and a galvanized pail to clean out the ashes.”