Nick and I are a tiny bit obsessed with the city of Austin, TX. It started years ago when Nick traveled with friends to visit some buddies from college and has turned into an annual pilgrimage. Happily, we have some family there now that we get to visit while we’re in town. It’s a surprisingly kid-friendly city and if it weren’t for the eight hour drive that would sit between us and Jack’s grandparents we’d probably move there.

We took Hwy 290 from Houston into the northern suburbs to visit Nick’s grandma, aunt, and cousin (and his wife and adorable daughter). The rural drive through hill country is much different from Louisiana interstates. There’s a gas station where we like to stop for homemade fudge.

Jack loved catching rides on Abuela’s walker. Not pictured: his ride on a neighbor’s golf cart!

We spent two days hanging out north of Austin in this much more rural area. It was so nice to just relax and take it easy.

We spent the rest of our trip in Austin proper. We got a great deal on a hotel near downtown through Priceline ($31/night for a room with a kitchen!). We spent a lot of time hanging out at various outdoor locales–this one was taken while riding the train around Zilker Park. 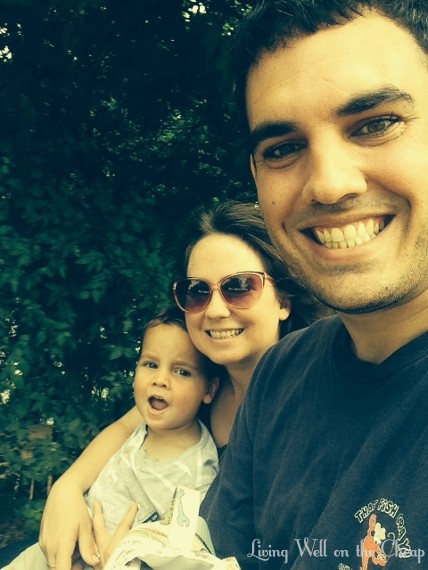 The same park is home to Barton Springs. We really enjoyed wading in the shallow areas. Jack is a total water baby.

The trip was topped off by a HUGE party hosted by some friends of ours. It’s a giant bash held every year with crawfish, live music, and a magical concoction called “summer beer.” They even have t-shirts. Jack somehow made it onstage during an impromptu karaoke session.

Nick and I had a running joke throughout our trip regarding “keeping it weird.” Keep Austin Weird is a slogan to promote small business and anytime we saw something that you would be very unlikely to see in the much more conservative town of Baton Rouge, or any time either of us did something we wouldn’t normally do, we referenced KIW (keeping it weird). A part of me wishes that we could leave our lives behind for just a few months to spend more time there without the commitment of leaving our friends and family behind long term. It would be so fun to take on a new adventure like that. I have always been the kind of person who became very attached to home–my parents lived in the same house until I was 12 and I was devastated when they announced that we were moving just a few blocks away. When I left my hometown for college I swore I’d be back after graduation, but before long Baton Rouge had become home and here I am, ten years later. I know that I would become attached to Austin in the same manner. I think that we probably will leave BR in a few years to be closer to family–I hate to travel even short distances and really want to be able to stay home for holidays and such. It’s so hard to make these decisions as a grown up. Years from now I’m sure I’ll wonder what it would have been like if we’d decided to pack up and move 500 miles away, just like I wonder what would have happened if I’d stuck with my original plan to attend Loyola in New Orleans rather than LSU. Would I still have met Nick? Would I even be a social worker? The place you choose to live has such a wide ranging influence over the rest of your life that the decision is almost overwhelming. I’ve always had a hard time understanding why anyone would just pick up and move away from friends and family if it weren’t required for a career or some other circumstance, but now I kind of get it. Sorry for the novel! I’ve just had a lot on my mind since leaving Austin Sunday morning. I hope you each had a fabulous weekend and thanks as always for reading!

One response to Keeping It Weird

Leave a Reply to Bridget from Cali Cancel reply