Sometimes I put a lot of time into a project and it ends up being totally not worth the effort. This is one of those projects. I wasn’t going to post about it, but I came up with a new idea to redeem it yesterday and I thought it would be unfair to post about the final result without showing you all the stupidity I waded through to get there.

It all started with this wall in my bathroom. I hung the two sconces flanking the mirror and the print centered above the toilet, but it’s such a short wall that it looked a little strange to have everything clustered together and then that empty space on the far right. A couple of you suggested moving the sconces to flank the print, but in person the current placement of the sconces makes more sense. 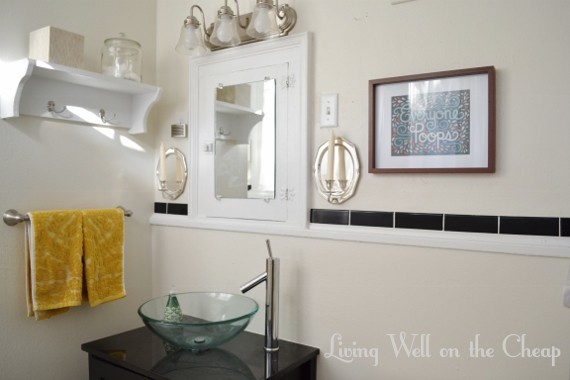 I really wasn’t sure what to do with it until my mother in law suggested hanging something tall and narrow to the right of the print. I kept my eyes peeled and when I saw this unfinished wood plaque for a few bucks at Michael’s I snatched it up thinking that I could possibly do something with it,

I waited for weeks for inspiration to strike, but no dice. Finally I painted it kelly green just to see how that color would work in the room. I liked it, but decided that it would be best if only the frame remained green.

I taped off the edges and tried several different colors on the inside panel, but nothing seemed right. Finally I painted it white, then got the idea to use painter’s tape to create a herringbone effect.

You can see in this photo how I used the tape as a spacer to keep the stripes uniform.

Then I painted the same color that’s on the bathroom and kitchen walls over the tape. I figured that since I like the way it looks against white trim in both of those rooms it would look good.

I knew as soon as I pulled up the tape that I hated it. It was both too subtle and too yellow. I painted the other half of the herringbone just to be sure but I didn’t even bother with a picture.

This poor little plaque sat in my laundry room for a month while I decided what to do with it. There was so much paint layered on it by this point that I worried any additional coats would look like crap and I didn’t have any more ideas for painting it anyway. But while out of town last week I got an idea and I’m excited to say that I think it’s a winner! You’ll have to wait until it’s finished to see the whole thing, but here’s a sneak peek of it in progress (you can also see in this photo just how badly the tone-on-tone herringbone came out).

Trust me when I say that behind every project you see on Pinterest there are plenty of fails. Maybe she knocked that one out of the park but there are probably plenty of projects she never posts about because they are so epically awful. Failure is part of the creative process and you’ve got to just push through it without taking it personally. Don’t let the fear of imperfection stop you from taking on creative endeavors! It can be so fun and rewarding when something finally comes out nicely.