A Day in the Life

About a year ago I wrote a post about what a day in my life was like. Things were maybe more interesting then, as I was working full time as a children’s therapist, but I can’t say I was any happier or busier than I am now. I’m surprisingly satisfied by life as a SAHM. There’s something about spending the day productively at home that suits me really well. People are always asking me what I do all day, and it’s hard to explain. I make meals and naps happen, I run errands, I write blog posts and do laundry and plan my grocery list. I’ll be the first to say it’s nothing earth-shattering, but I enjoy it.

7:00 I wake up to Nick plopping Jack into bed with me after going downstairs to get him from his crib and change his diaper. I haven’t been sleeping well lately, but I feel pretty good this morning. Jack and I lay in bed and nurse and cuddle for 30 minutes or so while I play on my phone and wake up a little more. I’m a morning person but I like to wake up slowly. Around 7:30 I get up, get dressed, and brush my teeth while Jack plays on the floor. I spray some dry shampoo in my hair and throw it in a ponytail.

7:45 we head downstairs for breakfast–sometimes we do eggs or fresh fruit but today it’s oatmeal with applesauce for him and cereal for me. 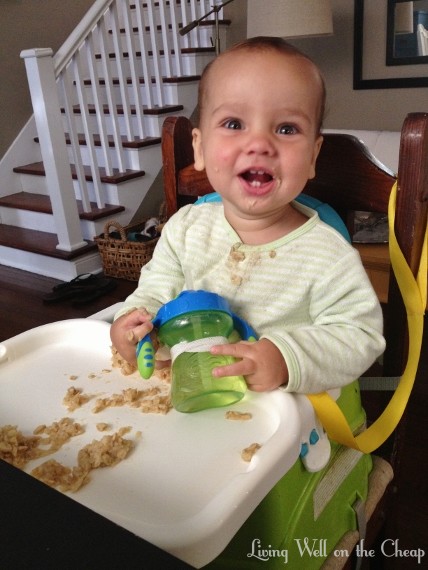 8:15 I start a load of laundry, change Jack out of his now oatmeal covered pajamas and we head to the front room, where he plays on the floor while I write my blog post 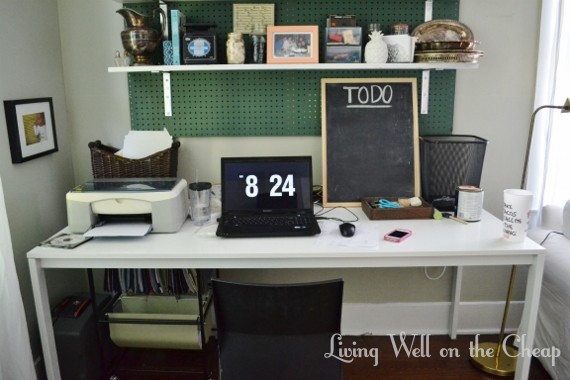 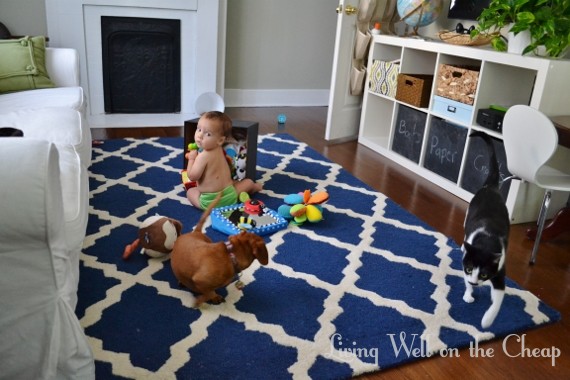 8:45 he’s starting to get clingy and fussy and I think it’s time for his morning nap so I change his diaper and rock him to sleep before lying him down in his crib. Six months ago he would only nap if I held him the entire time so the whole crib-napping scenario is still nothing short of miraculous to me. He’s down by 9 and I’m back to blogging

10:15 my blog post is up. I’m kind of dragging this morning. I check Facebook and switch the laundry before Jack gets up.

10:30 Jack’s awake! I nurse him, change his diaper, and pop him on the floor to play while I put away some laundry. 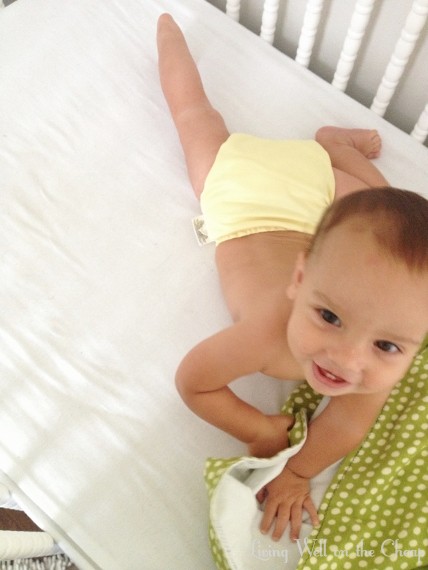 11:00 time for lunch! Jack and I have the same thing–leftover chicken, microwaved zucchini, and a peach I split between the two of us. I give him less chicken and I shred his up, but other than that our meals are exactly the same. 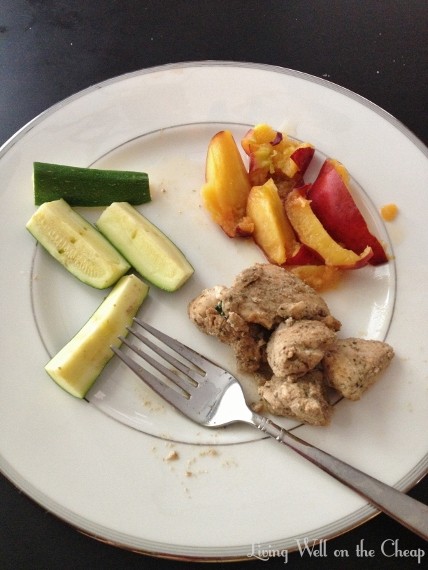 After lunch, we putter around the house. We play, cuddle, I do a little work on a craft project, we visit the backyard garden, etc. By 12:30 he’s getting grouchy again so I change his diaper (again. See how repetitive my day is?) and put him down for his afternoon nap.

He’s down by 1:00 and I’m ready to be productive. I water the plants and then sit down to fold some laundry, but then a friend texts me and somehow this happens: 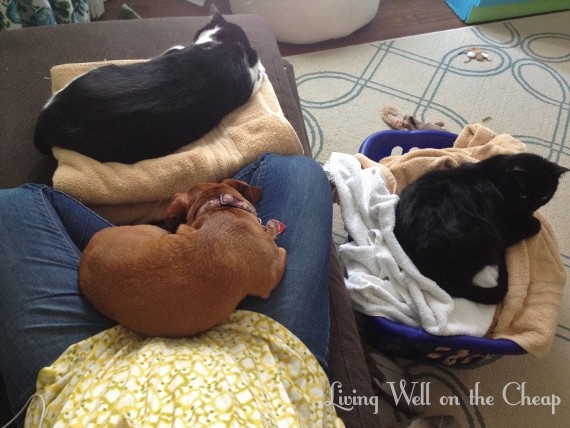 Before I know it it’s 2:30 and Jack is waking up. We nurse and then I finally put some real clothes on this kid and we head out the door to Lowes. I need to pick up a few things and late afternoon is when we usually run our errands. I get some potting soil and some PVC pipe to make a trellis for my sugar snap peas, which have outgrown the wood supports I use for tomatoes. The whole time I’m busy texting because I’m scrambling to find a new childcare solution for the one day a week that I work. I’m thinking about taking on more work in his second year so it’s important to me to find a good fit. Most daycares don’t take one year olds part time and I can’t afford to pay a nanny ten dollars an hour. I’m having a really hard time finding a good home-based daycare. In the midst of that, I get a text from work asking if I can come in two extra days this week for training. I’m feeling stressed! 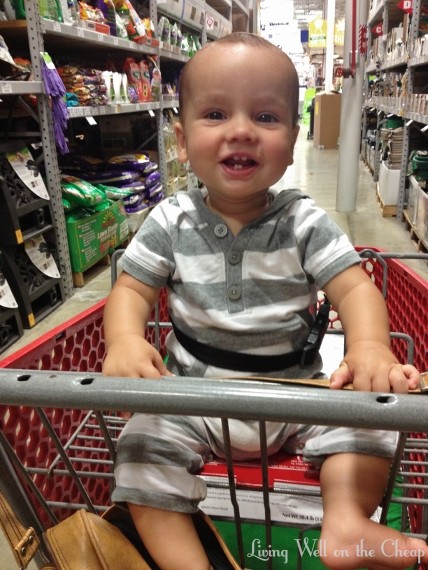 Back home, I text a potential babysitter, set Jack up with some toys, and get back to that laundry I was folding earlier. It’s already 4:30 but Nick texts me and says he’s not nearly done with work yet. 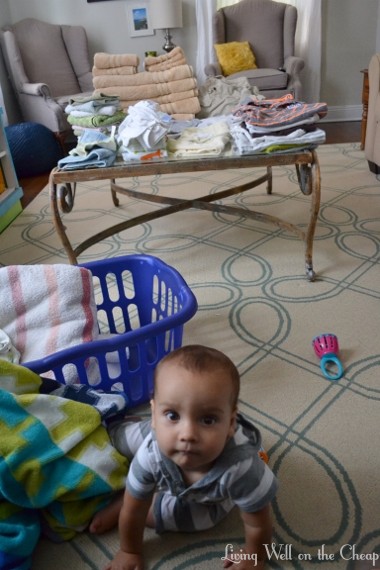 By 5:30 the laundry is all folded but Jack is getting fussy. I bring him upstairs and lock him in the bathroom with me while I shower. This is one of his favorite things for some reason. He loves when I peek out from behind the curtain to check on him. While I’m in the shower I miss a call from someone interested in babysitting. I call her back and we set up a time to meet. I’m feeling cautiously optimistic.

It’s 6:00 and Nick still isn’t home, which is sort of unusual but I go downstairs to start dinner and make our lunches for tomorrow, which is a work day for me. My mom will be coming to stay with Jack so at least I don’t have to pack his bag for a day out of the house! He is really into Juliet’s food and water bowls and I’m constantly having to retrieve him from the laundry room. Juliet is not amused. 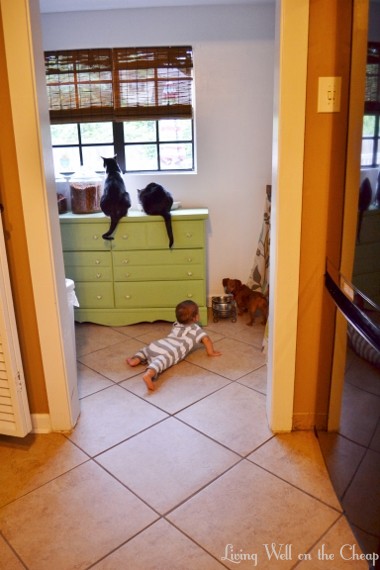 Nick gets home at 6:15 and takes Jack so I can finish cooking dinner. I get the laundry put away, too, and even have a few minutes to go sit on the back deck by myself and read. Dinner is done by 6:45. We’re having pasta with meat sauce–a family favorite. 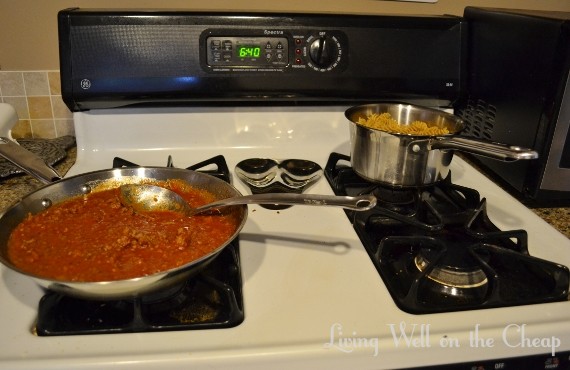 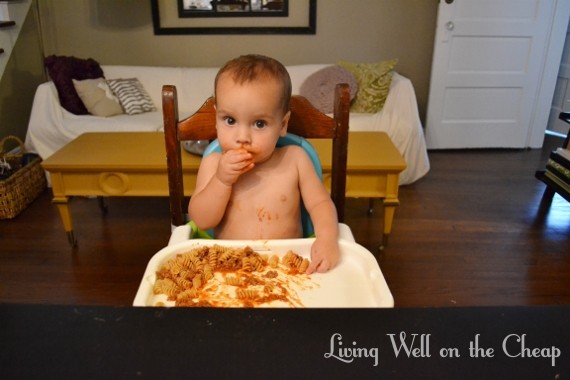 I clean up dinner while Nick bathes and changes Jack, then Nick finishes the dishes while I put baby to bed. He’s down by 7:30 and the night is mine! 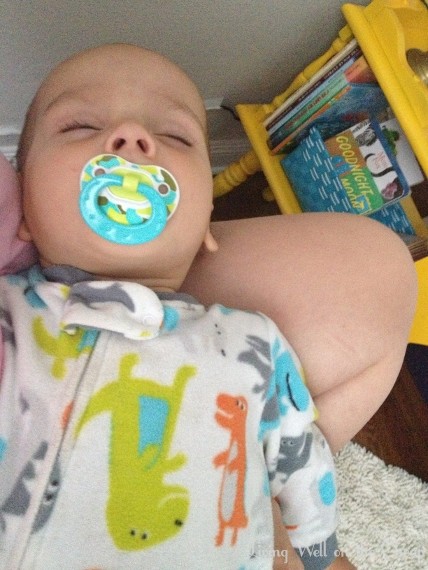 I edit and upload a few pictures for tomorrow’s blog post and then settle into the couch with Nick. All of our favorite shows have wrapped up for the summer so he watches sports while I read the final Sookie Stackhouse novel on my phone. We’re in bed by 9:30, but as I mentioned early I haven’t been sleeping well lately. I had a falling out with a friend recently and I am literally losing sleep over it. I need to just accept that it’s for the best and move on. I’m awake until probably midnight, but I sleep soundly after that.

Overall, life is good these days. Jack sleeps all night and takes two good naps, I have a wonderful husband who enjoys sharing the responsibilities of parenting and housework, and I’m able to have the best of both worlds by working part-time at a job I enjoy (I’m working with adults with serious mental illness now–it’s fascinating!). If I’d written this post six months ago it would have been overlaid with a tone of desperation and exhaustion, but not now. I’m so grateful for everything that has come together to bring me to this point, antidepressants and baby sleep training included! It feels good to have cultivated such happiness in my life.