Last Saturday was Jack’s first birthday. It was kind of a big deal for us, obviously. First birthdays are definitely as much about the parents as they are the babies. That first year is so intense and emotional and demanding–marking the end of it is part sigh of relief, part mourning the tiny newborn that grew so fast, part celebration of the toddler your baby has become.

Anyway, we wanted to have a small party at our house with friends and family. We kept it simple with a cold lunch, cupcakes, and easy decorations (not pictured below: the cheese plate I forgot to pull out of the fridge until later). I used mostly white ceramic dishware I already had and scattered a bunch of tissue paper confetti around the table. I made things easy on myself with disposable plates and forks, but at least I opted for the recycled content plates for a few cents more.

I covered the table with a canvas painter’s dropcloth (the same one that I keep folded up on the back of the couch in the playroom/office), and just tossed a tea towel over a cardboard box to make a little stand for the cupcakes. My sister cut off part of a foil muffin pan to make a little pedestal for the birthday boy’s cupcake to sit slightly above the rest. 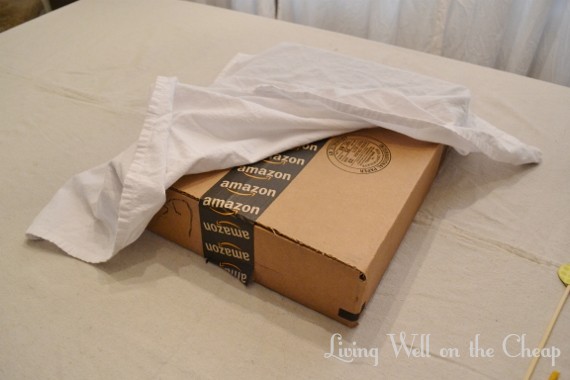 The only other decoration was this fun photo garland. I forgot to take a picture of it before the party but it was still up the next morning. I got a bunch of pictures printed at CVS and hung them up in chronological order with some clothespins and string. I actually printed 64 pictures total but only 24 went up on the garland. After the party I put them all into an album–I didn’t keep a baby book but this is almost as good. The album I bought* has enough space that I can do this for the next two years and by Jack’s third birthday I’ll have an album of his baby/toddler years from beginning to end (that’s the album sitting on the ledge there). 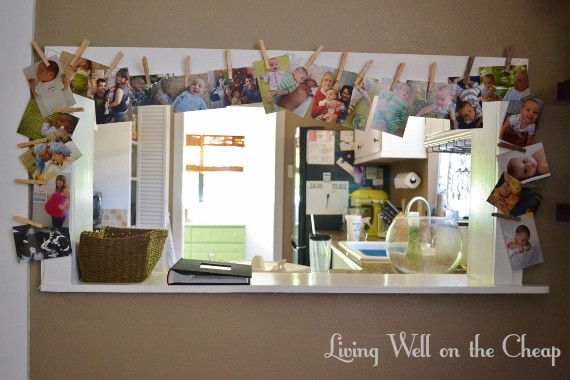 Jack seemed to have a really good time visiting with all his baby friends, not to mention the doting grandparents. I think he knew it was his party. 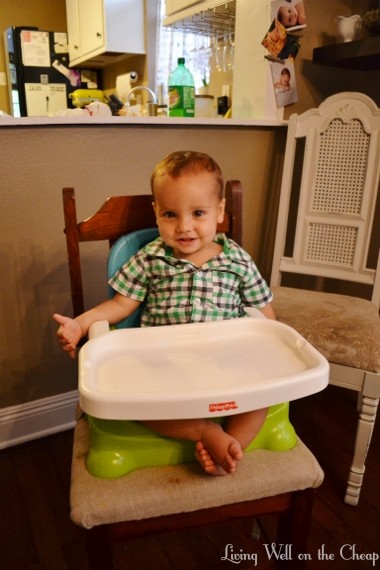 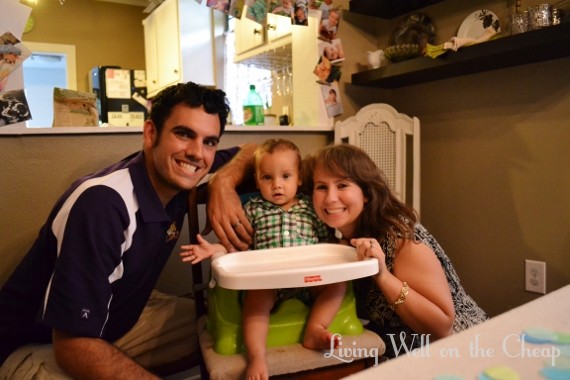 My sister made the cupcakes–pineapple carrot cake topped with cream cheese frosting (and all of it sweetened with agave instead of sugar). I printed out the “1″ circle from here and glued it onto a bamboo skewer to make Jack’s cupcake a little extra special. 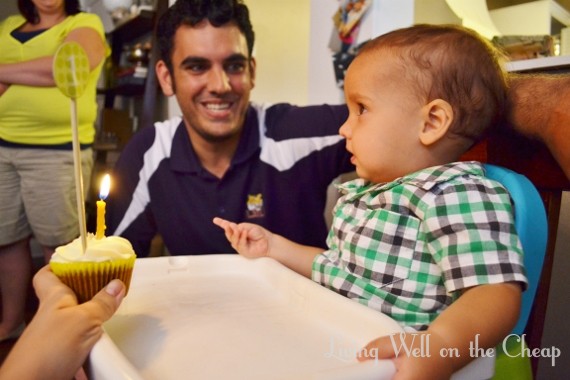 I’d say he was a fan! I was too. Those cupcakes were delicious for something so healthy. I’ll link to the recipe below.

Friends with older babies tipped us off that opening presents usually does not go well with a room full of toddlers, so we waited until there were just a few family members and close friends lingering and helping clean up before tearing into the gifts. By then the birthday boy had been stripped out of his cake-covered outfit and he and his two baby BFF’s had fun playing with his new toys. I made sure to jot down who gave us what so I could send a thank you note to all the folks who weren’t there to see us open their gifts. 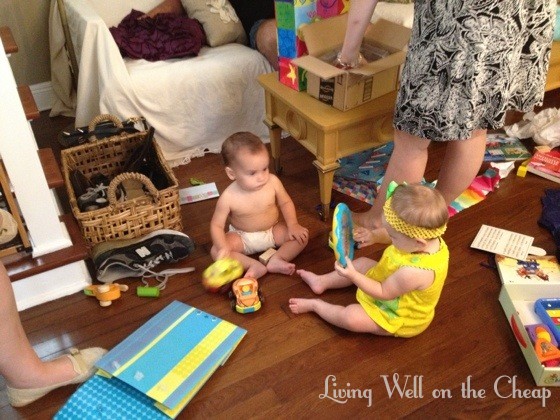 My mom’s side of the family always gets together for the Fourth of July so we held off to celebrate with them on the holiday instead of asking them to drive over an hour for the party at our house. It was kind of up in the air yesterday what we were going to do because my grandpa was in the hospital, but my parents ended up hosting everyone at their house and we had so much fun. We took some time out from celebrating America to pull out an angel food cake with whipped cream and fruit and sing Jack happy birthday. I think he is really liking this birthday business–he gets to eat cake! He got some more cool toys and cute clothes and was spoiled with hugs and kisses and cuddles all around.

In case you’ve got a kids’ party of your own coming up and are at a loss for what to serve, here’s our menu:

Altogether we spent about $150. Not bad, I think! Everything was going smoothly until half of the guests fell violently ill the next day. Apparently I was carrying some sort of stomach virus that I passed onto almost everybody through the food I’d lovingly prepared. At least one person from each family got sick on Sunday, and the rest of them caught it from each other in the following days. I felt so terrible! Next time I cook for a crowd I’ll be scrubbing my arms up to my elbows like a surgeon for fear of getting everyone sick again.