I’ve never really minded the light in our kitchen. I think it’s pretty, actually. The problem is that it is not exactly functional for the space. It’s designed to double as a pot rack but hangs in the middle of the room, where even little ‘ol me would bump my head if pots were actually hanging from it. And although the three lights are minimally sufficient they only cast light directly downward to the floor, leaving the kitchen work areas poorly lit. 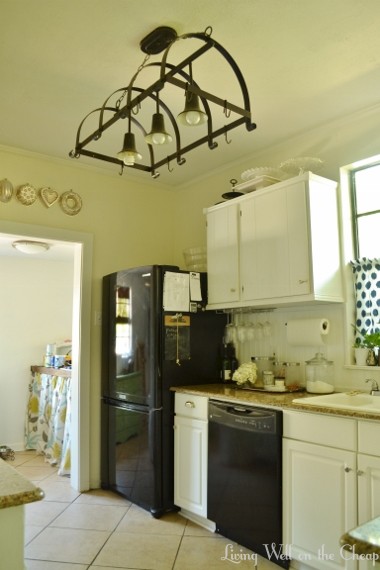 I’m thrilled to say that we installed a new light this weekend! It went MUCH more smoothly than the last time we switched a light fixture (that light is still crooked, btw). But before I show you the new light, here’s Nick holding the old one up in a more appropriate place for a pot rack. That spot is sorely in need of task lighting so I’m thinking of hiring an electrician to install a box over there. It would crowd the cabinets a bit though. 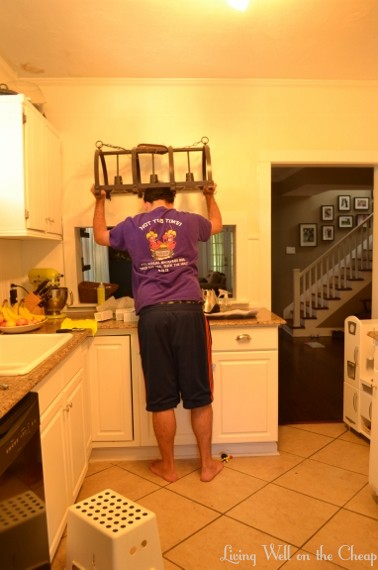 And ta da! Here’s the new light. I picked it out at Lowe’s and my parents generously got it for me for my birthday. It came with four 13-watt CFL bulbs and was a cinch to install. 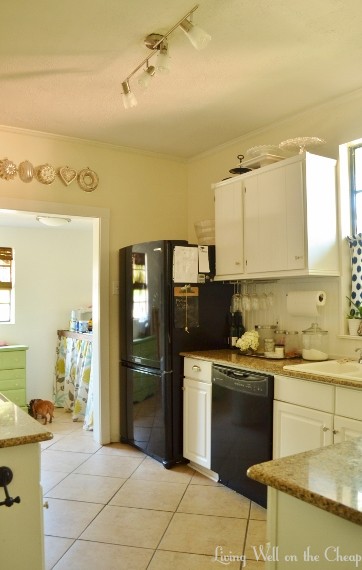 I am a little bummed, though, that the hole cut around the junction box is bigger than the canopy. And ugh I don’t want to paint the ceiling but I need to.

It’s kind of tricky to get a picture of a light while it’s on, but this is a fairly accurate representation. It’s much brighter than our old one. 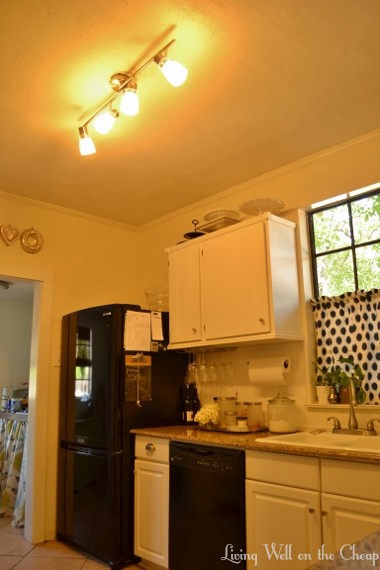 I’m surprised to say that my favorite part is the increased head room. It’s a lot smaller than our old fixture and is much lighter visually, so it just kind of fades into the background and does its job. I like that in a light sometimes. And in a relatively small kitchen the open space overhead makes a difference. This is exactly why I’m hesitant to hang the old light over the counter as a pot rack. I’d love to get my pots out of the pantry but I’m worried they’ll feel oppressive looming overhead while I chop veggies or whatever.

When I think back to what the kitchen looked like a few years ago I am so, so pleased that I made the effort to change it. The new look is so much more my style. (it also helps that my photography skills have improved)

So, questions: What should I do about the gaps in the ceiling? Should I install the pot rack light over the counter? If not, should I consider installing some other task lighting there, or leave it as is? And will you come over to help paint my ceiling and crown molding?

Ps, if you usually get by posts in your email inbox, did you get this one today? I just switched hosting companies and am still working out the kinks