This was one of those weekends where I felt like I was constantly working on something but didn’t really get much done. There are nearly a dozen half-finished projects scattered across the house and I feel like I’m losing my mind. But one thing I like about this particular project is that even though I’m only halfway done I can actually see it coming together, creating the illusion of accomplishment.

This area of our dining room has been through several incarnations. Back before I started this blog I had a dresser there that served as a buffet. Then I brought in a vintage sofa, covered it with a dropcloth slipcover, and called it a seating area. But recently I sold the sofa and coffee table and replaced it with a pair of vintage chairs and an old sewing table. The new setup allows much more room for Jack to play while I’m working in the kitchen and is easier to keep clean. A few weeks ago I hung an antiqued-ish mirror above the table, but it was still looking a little sparse for my taste and I knew that I wanted to hang more art and photos to fill the space above the chairs.

I really wasn’t sure where to start, so I got out some graph paper to sketch it. As soon as I had it on paper I decided I wanted to have two clusters of frames that were each the same size and shape as the mirror. I feel like I’m not doing a good job of describing it but you’ll see soon enough. 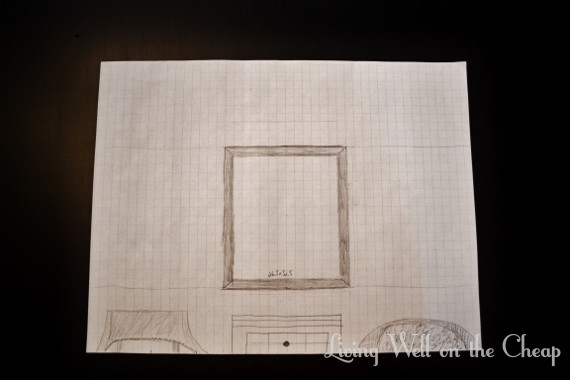 I measured out the size of the area I wanted to fill on my dining table, marked the edges with painter’s tape, then filled it in with frames I already had 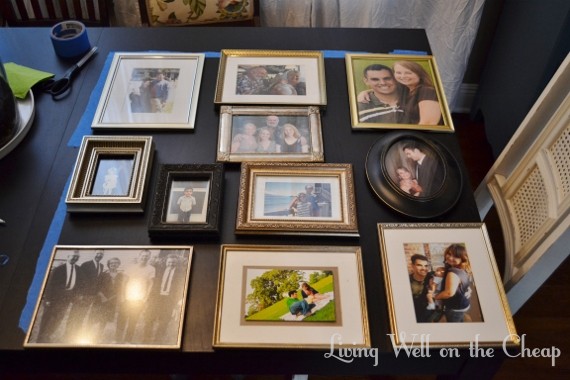 Once I had my arrangement loosely planned it was only a matter of hanging the first frame. I measured and marked so that the top of the frame would sit exactly level with the top of the mirror. 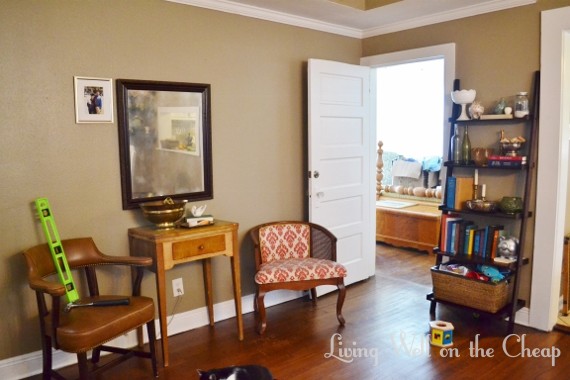 I continued along the top row, keeping the tops level and spacing them so that the width of all three frames together was the same as the mirror. 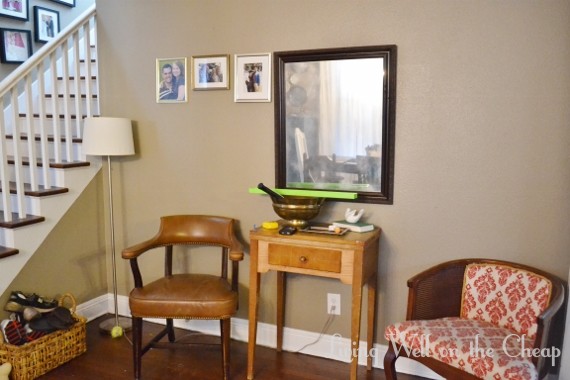 Then I moved down to the bottom corners. At some point I started using bits of painter’s tape to mark various spots as I measured. 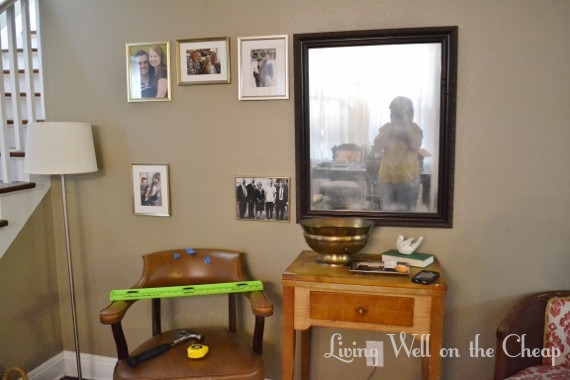 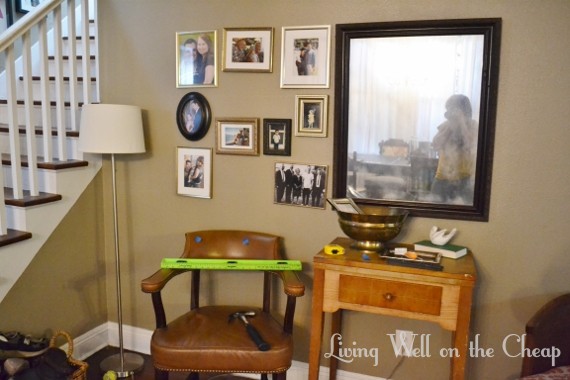 Eventually all my frames were hung and I’d only made maybe half a dozen unnecessary holes. I’m gonna call that a win. 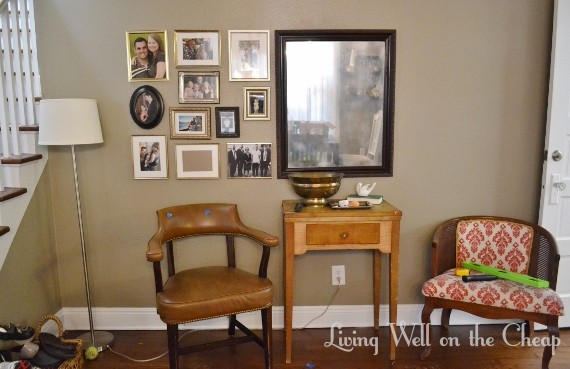 I was a little worried about the frames being so low right next to a chair, but shortly after I finished hanging them I walked in and found Nick sitting there completely unbothered. After he got up I used some museum putty to help stick all of the frames in place. This way they won’t drive me crazy by looking crooked every time I walk by or get messed up if someone brushes against them. Museum putty is a lot like sticky tack, except supposedly stronger but I don’t see a big difference. It’s awesome for securing pretty things in a house with not-so-careful people and animals. I need to use that stuff on the frames on our stairs! 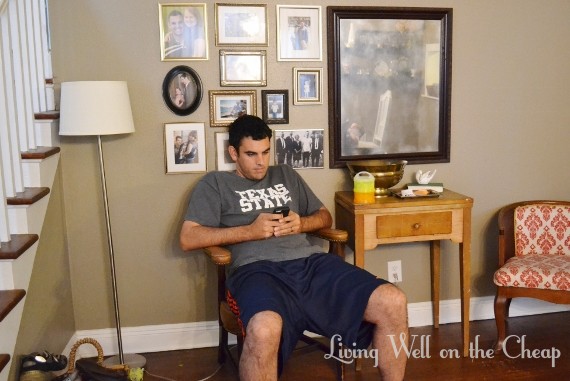 The next day I filled in the last frame with a photo I had printed at CVS and added some little whatnots to the larger empty spaces (I already had the big key; more on the paper tassels tomorrow). 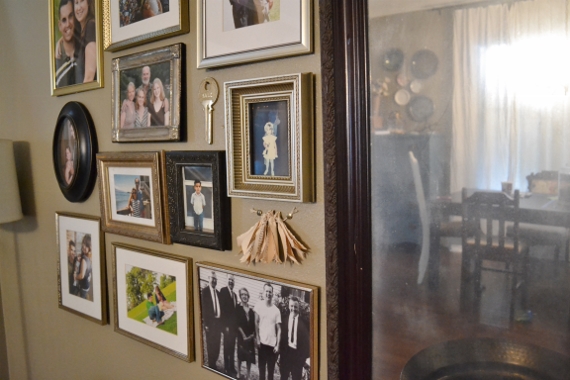 Nick was facetiming with his mom that night and when she caught a glimpse of the frame wall in the background she complimented it and said that I needed a colorful pillow to sit in that chair. I completely agreed and searched my house for the perfect pillow right then and there. This one might not stay forever but I dig it for now. If you look to the far right in this photo you can see that I’ve already started on the other side. I need to make a run to the thrift store for more frames and probably get a few more photos printed before I can finish filling it in. 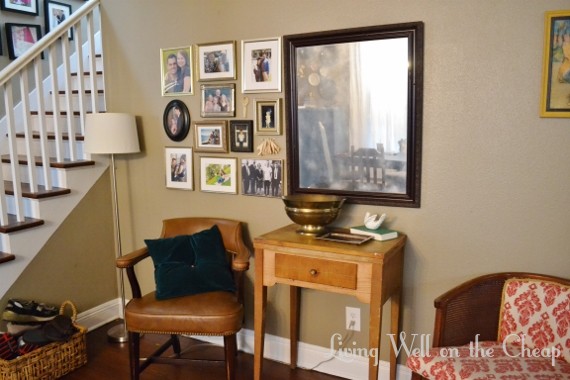 If I close one eye and focus only on this spot I can almost imagine that I managed to complete an entire project from start to finish. Almost. 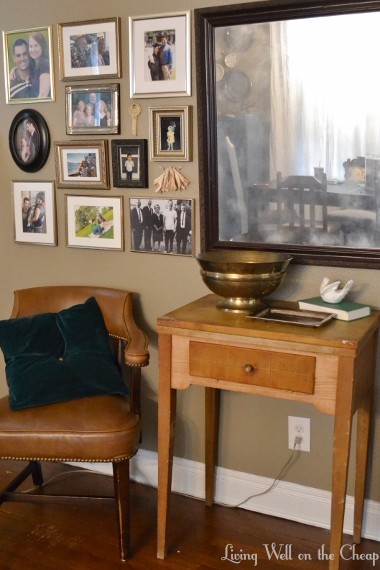 Next up: hanging more frames, adding some toy/game storage under the table, and maybe switching out the glass in the big frame for a real mirror to replace my fake antiquing attempt–I’m still not sure how I feel about it. Thoughts?